Your one stop shop for sweet new Nagel Brothers clothing and gear. For information on your next exterior project head to https://nagelbrothersllc.com/

We strive to provide you with an awesome customer service experience whether its during your roof installation or your merch purchase. We know that without our awesome customers we are nothing and look forward to repaying that with some awesome deals and the occasional giveaway. If your looking for something we don't have please feel free to contact us we would love to hear from you! 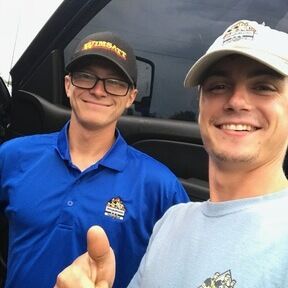 Albert and Charles Nagel began working as hourly employees for a local roofing company in Fall 2016. Like many before them their first taste of the construction industry was as grunt laborers. It just so happened they got their foot in the door at the start of Winter with an exteriors company. Needless to say the months that followed were nothing short of epic. Sometimes while sitting in an idling vehicle warming frozen and often bloody fingers on car air vents, Charles and Albert would discuss career paths or business opportunities. These conversations would vary in levels of seriousness depending on the work day and at one point even progressed into them learning a small amount of computer programming together. The one thing the brothers always agreed on was that they would never get stuck doing manual labor in the cold for the rest of their lives.

By the beginning of Spring both brothers had learned the ins and outs of what was happening on the job site. This knowledge was a direct result of their efficiency and ability to develop a system. They would get their job done so quickly that it would open up time for them to learn what the other workers were doing. This is not to be mistaken with rushing their work. Even when cleaning trash Albert and Charles understood that perfection was key. With this new found confidence and understanding the brothers began to hunger for more money. They were both still seeking an alternative long term career choice, but decided why not make the best out of a stable job in the meantime. So the two approached the contractor they were working for an asked how they could earn more money. The answer was simple, become a contractor.

Through the next few months and into the spring the Nagel Brothers began taking leaps and bounds into the industry. After buying a basic set of hand tools and beginning to take part in more of the skilled labor and less of the labor, Albert and Charles began to really enjoy their work. The two began taking interest in other aspects of residential building and home improvement; expanding their skills past roofing. This lead to the younger brother Charles diving into the books and acquiring a residential builders license at only age nineteen. As the brothers spent more and more money on legalities and tools they would work harder and harder trying to keep the budget on pace with their ambition. Every day began to pick up pace and by July of 2017 they had a new trailer full of the best tools, an LLC, a new company logo, and they were taking work from various contractors in the Lansing area along with completing their own jobs through the marketing they had begun to do.

To this day Albert and Charles continue to create an ever expanding skill and tool set to help more customers with more of their construction projects. Constantly reinvesting in their business and driving it forward. While at the same time never sacrificing quality for quantity; always seeking perfection.